Sofia and Andrea are a great couple, or rather they were. With their decade-long marriage in crisis, they consider getting divorced. However, after a scientific experiment arranged by Andrea, each of them finds themselves in the other’s shoes. Literally. Andrea is Sofia and Sofia is Andrea. They have no choice but to start living each other’s life and daily routine. She, as him, is a genius neurosurgeon leader in brain experiments. He, as her, is an ambitious and rising tv host.

A biting and daring comedy that tells of an incredible and surprising journey that Sofia and Andrea will be forced to undergo in their partner’s shoes; an experience that will change them forever, giving them back their mutual empathy and connection, essential for truly loving someone. 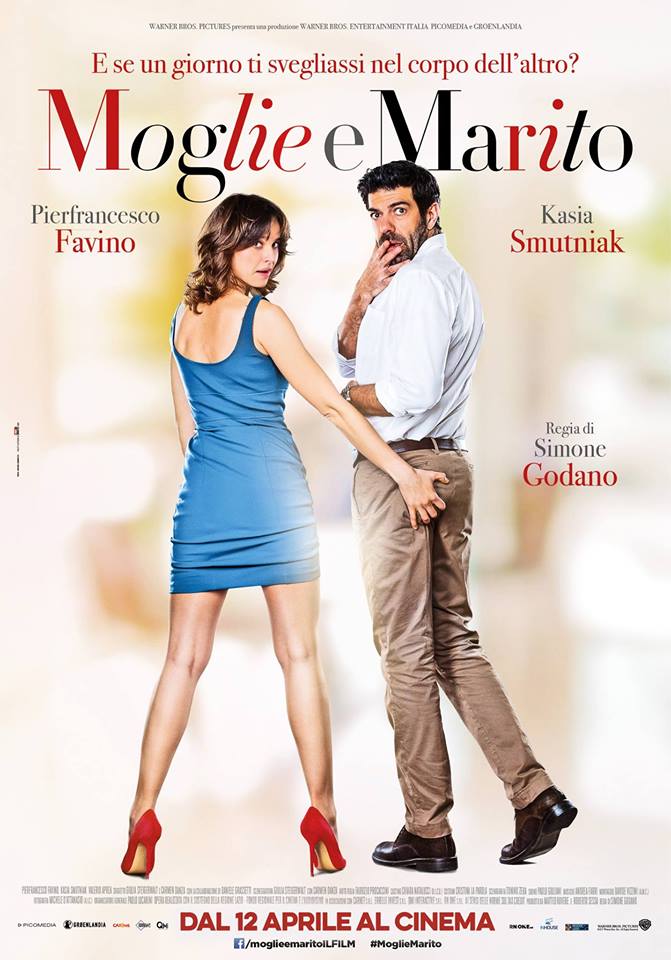 What if one day you woke up
in someone else’s body?

I immediately and unconditionally loved “Wife & Husband” script that Matteo Rovere Submitted to my attention. Then I suddenly thought about how to tell this story and guessed two possible approaches to the movie: making a detailed study of everything or jumping and enjoying the dive. I chose the second way, persuaded that a big freedom and fun would have been ideal elements for this film.

Sometimes the psychologists ask to his/her patient to tell an episode from someone else’s perspective, as if the teller were the person of he/she is talking about. Moreover, what’s surprising is that, while telling a story being in someone else’s shoes, often you discover things that you haven’t even believed. Suddenly you can understand how the other person has felt, and how little careful or absent-minded you have been. What if instead of just one hour of counseling, you would be living in your partner’s body? I asked myself how to return the credibility I wanted the film to have, nevertheless starting from a creative input. From the very first reading of the screenplay, I have always thought that the leading and “surprising” element could have been telling this story with a realistic style, close to the characters, sincere in one word. Then I mixed different elements, leaving the actors free of living this experience, building around them a stratified world that would tell explain their whole life, not just the present, but also the past one. The result has been a transformation from a “supernatural” movie to one about relationships, crisis, love that dies and returns thanks to the discovery of the different points of view. The genre is used here in order to create a romantic comedy, the script was smartly doing that.

Of course we have worked on the bodies, on the expressions, on the characters. Pierfrancesco and Kasia studied and “soaked up” each other, making sure that the initial spirit of freedom of being in the other’s body for the first time, was the movie’s soul. That because none can know – for sure – how he/she would feel if suddenly became her husband, or his wife. I had the chance to direct two “prodigious” actors who were willing to play, so everything became easier. Kasia and Pierfrancesco are two real “stars”, two pros with whom it’s easy to get along and who have the chance to entertain having fun at the same time, surprising themselves and us. Andrea and Sofia are two rolling stones, one in the shoes of the other, causing only disasters. Anyway, this will give them the chance to reflect on their love, on which the word “end” seems to be written. A unique chance to deeply understand each other and find again the missing harmony. This happens because everyone makes mistakes, especially when it comes to love. You always think that the person you love must be perfect, but this perfection doesn’t exist, so you happen to fight, to get back together hoping again that this time it will last forever, but the risk of not fully understand the other is still there. It would be enough just loving your partner for what he/she is, not as you wish him/her to be. Can we understand how our partner really is? And, if we can’t, what kind of adventure would we be willing to live in order to fully understand him/her?

Wife & Husband is a realistic movie that starts from a daydreaming input, but, first, it is a film about love, in which incompatibilities are welcomed as a victory and not considered neither as a defeat nor as a compromise. An improbable movie, but real. Real and funny. An out-of-date film, and contemporary at the same time, elegant but ramshackle, and the funny thing of Cinema is all in this: you don’t have to respect strict rules. Believing in the story of two people that have switched one in the body of the other. Just for two hours, without taking yourself seriously.