GROENLANDIA
with RAI CINEMA
in association
with 3 MARYS ENTERTAINMENT

Young, talented, undisciplined, rich and spoiled. Christian Ferro is THE CHAMPION, a genius football-rock-star, the new idol everyone in the world of sports has their eyes on.

Valerio, solitary, bashful, financially troubled and with a shadow cast upon from his past, is the professor assigned to the young striker when – after his most recent escapade – the club’s president decides it is time to teach him the importance of discipline through a crucial milestone in his life: his secondary-school exams.

Both of them, who could not be more different from each other, find themselves closely connected and develop a bond that will change them. 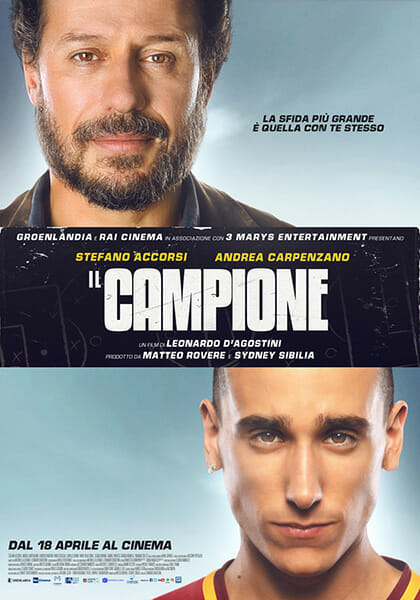 The forced relationship
between two characters
who are worlds apart

The Champion is a coming of age story, that alternates between comic and emotional registers. Central to this is the meeting of two opposing worlds. That of Christian Ferro, a young man, just twenty years of age, who is shamefully rich and arrogant and without any points of reference – but who is also generous and in need of love, even if he doesn’t know it. And the other is that of his professor, Valerio Fioretti, a cultured forty-five year old with a past full of promise, who has to help him, if not force him, to get his high school diploma. However, due to his inability to live and move on, he has found himself in serious economic difficulties and deeply disillusioned by life. He is a refugee in voluntary exile from the world.

I liked the idea of talking about this: the forced relationship between two characters who are worlds apart. A rebellious young man of great talent and unlimited prospects and a man who no longer seems to have any prospects, or to even want any. I liked the fact that this conflict gave rise to a great friendship (Dino Risi’s Il Sorpasso was an important reference in writing this, as were two other films in which the aspect of friendship and coming of age are fundamental, these were Quasi Amici and Good Will Hunting). I asked myself: what would happen if a rich, spoilt, young footballer, who seems opposed to every rule and teaching, had to live with somebody for whom the rules have to be respected? And what would happen if the man who has to teach him about the world of discipline, is the one who has nothing more to ask of life. A man who has an overwhelming feeling that he has made a mistake and no longer has the will to start again? To get better, they will have to overcome their limitations and their rough edges, in order to recognize that the wound that causes them pain is the same and they will have to trust each other.
Only in this way will they gain new strength, to face the future and the solitude.