The Castelvecchios are a family of eccentrics, open minded but also narcissistic and disjointed characters.
The Petagna family is the exact opposite: united, socially humbler and rooted in traditional conservative values. Why do such different families find themselves spending their summer vacation together? Only the heads of the households Tony (Fabrizio Bentivoglio) and Carlo (Alessandro Gassmann) know: the unexpected announcement of their love will disrupt the balance of the two families but most of all their two firstborns Penelope (Jasmine Trinca) and Sandro (Filippo Scicchitano). 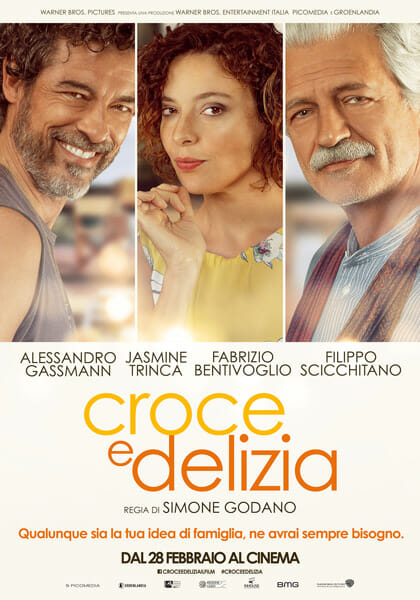 A setting outside
of time and space

Chapter Zero: Finding the Idea
Many say that the second film is more difficult than the first. My first thought was to give continuity to the work done with Moglie e Marito. Together with Giulia Steigerwalt, and the support of Matteo Rovere’s creativity and production, we looked for an idea that would allow us to make a comedy with a strong emotional structure, that would allow us to tell something contemporary.

Chapter One: Many Movies in One
Working on the development of the plot we immediately found a pitfall. We realized that we had several issues to deal with: homosexuality, social conflict, children’s judgment of parental choices (once upon a time it was the opposite) and conflicts within families. We didn’t get scared and we understood that this vastness of themes had to be transformed into a resource under a common denominator, the acceptance of others.

Chapter Two: No bad guys
A key to the film is the absence of bad guys. But how can we make a film like this without falling into rhetoric and goodness? The choice was to ‘stay’ with all the characters, for better or for worse, and understand their point of view. Around the positive character of Carlo (Gassmann) rotate three characters with apparently negative facets: Penelope (Trinca), Sandro (Scicchitano) and Tony (Bentivoglio). I also wanted to be on their side, understanding and defending what motivates them. To love one’s characters, has been for me, a starting point for this story.

Chapter Three: The monsters of our cinema
The choice of actors was a fundamental step. Working with the ‘monsters’ of our cinema is always a great stimulus for me. Thanks to them, I was able to raise the emotional stakes of the film and aim straight at the goal: to tell a true story. I had to be sure that the love story between Tony and Carlo was credible. From the first time I saw Alessandro and Fabrizio together, I had no doubts about this, thanks to their outstanding approach. Fabrizio Bentivoglio, the actor par excellence, who made me discover what it means to ‘absorb’ a character. He got into Tony’s shoes and didn’t leave them until the end of the process. His was a character who risked looking eccentric and empty. However, he managed to show his love for Carlo through his eyes alone. Gassmann is one of the few actors who could have done both roles, both the distinguished Tony and the simple Carlo. We couldn’t have made a better choice. With his Carlo he gave the character a goodness of heart, a heart so big and with a simplicity that cannot fail to leave you totally moved. I had an incredible group. 12 actors almost always on the set. Scicchitano, a great actor of heart and soul, Galiena and Savino, two ladies of the cinema. The children will be stars of the future. Cupaiuolo, la Ponsot and Rosa Diletta Rossi three real talents. And then Jasmine, the contrast par excellence, almost a living oxymoron. As light as she is powerful, lost but present, fragile but robust. We kidnapped her for two months to allow her to make a fearsome ‘comedy’. And she had fun. Her gaze keeps the meaning of the film and her eyes have a power that bewitches, that glues you to the screen.

Chapter Four: the villa
In choosing the setting for the film, the villa played a key role: I didn’t want to make a static and claustrophobic film, let alone a glossy one. It was necessary to find a space that would allow me to move the actors and vary the scenes. When I entered Gaeta’s villa I had the immediate and instinctive feeling that the location was perfect. I wanted a setting outside of time and space. And so it was.

Chapter Five: Love and Family
This is basically a film about love and family. Love between two men, between two fathers for their respective children. It is above all the love story between Penelope and Carlo, between a lost daughter, who finds in the person apparently furthest from her, the father she never had. In this story the characters are not asked to make compromises, but only to leave room for the feelings of others, accepting them for what they are. They are asked to ‘let themselves be surprised by life from time to time, which is beautiful’.