Alessandro wears his sparkly lucky shirt and is having a blast. He is in his fifties but that is just a number to him. After having performed for a dry audience, as every Saturday, he spends the rest of the night at the Blue Star Disco. When his mother refuses him money to hook up with younger girls, Alessandro loses it. After a life wasted on gambling, drunkenly bragging and hoping for a scratch card to change his fortune, he would never have imagined that love would be knocking at his door once more. And in an hospital hallway of all places. It is there that he meets Francesca with her green, bright and melancholic eyes and her childlike ways.

In August Sardinia is a place of golden fields, scorching concrete and shimmering seas. Alessandro embarks on a journey with Francesca to seize his last chance to do good. 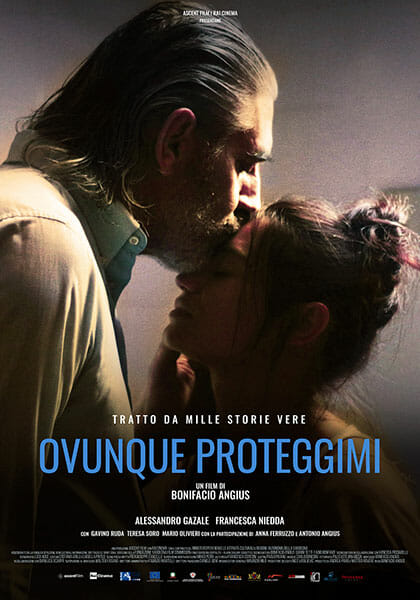 a dramatic yet
bitter-sweet story

Every time I think about a story and the characters that will play in it I always find myself reflecting on how my life would have been if I haven’t found my medium to narrate such stories, if I haven’t had cinema in my life. Cinema saved me, it helped me exorcising my fears and anxieties, it was and still remains a fundamental therapeutic element in my creative process. Without it I would have been caged, a man jailed in a world that doesn’t belong to him, a world that is inexplicable, a world to be afraid of. The same world that one should punch in the face or run away from, just like the characters in “Wherever You Are”. This is how I internalized Francesca and Alessandro. Him holding on to a passion that slips through his fingers and becomes almost unreachable, too full of dreams to let go but too weak to fight for it. Her running from a wreckage-life, robbed of her loving son, deceived by a cynical and judgmental system that abuses of its power to violate all feelings that are pure, honest, real but still believing in a form of salvation.

My personal need, that is almost an urge, to communicate and represent what I feel inside derives from my own personal experience. If the characters that play in my movies are depicted as irrelevant, negligible, I can then say that I am irrelevant and negligible myself. There’s no reference to Zavattini in my movies, I don’t tail nobody, I peek at the world through they keyhole, I don’t stare at some animals caged in zoos. I am already there, inside that cage with them that are not just misfits but a silent majority, nothing but negligible, they are the beating heart, the guts of this world. My feelings and experiences, my anger, my deepest fears are exasperated and brought to the screen. It is almost a way for me to drive them away, to convert them from negative to positive, from poison to antidote. I want to portray them through cinema in an attempt to make them simple, clear, as if they were a Chaplin’s movie o a Japanese cartoon from the 80s. I use a direct narrative mechanism, emotionally honest that does not fear its authentic nature, the language follows the same “rules”, it comes from the citizen’s cinema, a vein of popular culture that is now almost forgotten.

A cinema made of its characters, accentuated by all the expressive elements merging in one body, elements that made me fall in love with the screen when I was a teen. The feelings of isolation, revenge, loss, love, madness, drama, the soundtrack are all incredibly important factors in this movie and are all equally responsible for the strength of the narration, turning the story into a rapid, gripping, bitter, ironic yet painful adventure. The aim of “Wherever You Are” is to take the heart and mind of Alessandro and Francesca, raise them and show them to the whole of humanity, the same humanity that daily excludes them and doesn’t pay them attention, the humanity we and them are part of. It is a losing battle that can still give us, only for a few moments the feel of being a little less lonely.