I Can Quit Whenever I Want
Masterclass

GROENLANDIA
with FANDANGO
and RAI CINEMA

The band of university researchers caught between crime and legality is back. And the neurobiologist Pietro Zinni is back, ready to tie up all the loose ends from I Can Quit Whenever I Want. If in the first chapter they had worked to create a new legal drug, now it is the law to call on them to eliminate thirty from the market and wipe the slate clean.
Pietro, persuaded by drug squad inspector Paola Coletti calls his distinguished colleagues back together, adding some new valid elements to the group of brain drainers.
The mission is extremely delicate and among the substances they are after there is one that really gives them a run for their money… Sopox: totally pure and perfectly synthesized.
The second chapter veers towards action comedy, with accidents, chases, explosions, robberies and attacks.. an unstoppable avalanche of situations and characters, more and more daring and stupefying! 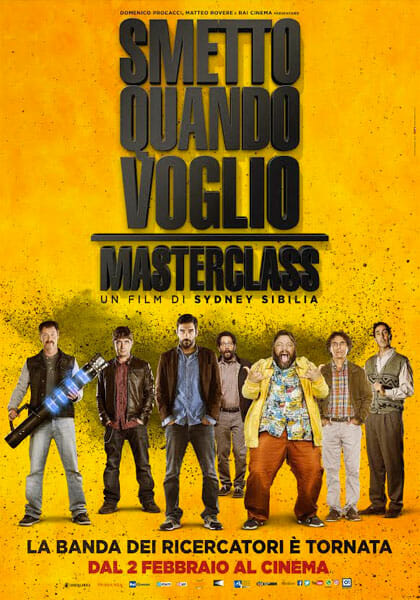 So many actors,
so much adrenaline

Let’s get one thing clear. Director’s notes are a very difficult thing to do. Summarising almost three years of work in one page of a Word document is one of the most complicated things I have ever had to do. Let’s start from the simple things which maybe you already know: I Can Quit Whenever I Want – Masterclass is the second chapter in the trilogy and It was filmed at the same time (or back to back as the professionals say) as I Can Quit Whenever I Want To – Ad Honorem which would be the third and final chapter in the story.
We all had lots of things in mind when we chose to extend the world of I Can Quit Whenever I Want To with another two films and I am happy with the result: a mix of classic Italian-style comedy and the American Marvel trilogies.
It was the Autumn of 2014 when, as a joke, in an interview in London I spoke for the first time about the trilogy of I Can Quit. The film was at the height of its great little success and everyone was asking me about a hypothetical ‘Two’. Sequels, it’s well known, are always a thorny issue. In Italy, the tendency is to see them as a money spinning operation, a sort of take the money and run, something directors and writers should stay light years away from. Yet something didn’t seem right. My cinematographic training, as I have said many times, came through watching a whole series of films from the 70s, 80s and 90s, both Italian and American, which were sort of my film school. Among them were the films I still love today, Terminator 2, Ghostbusters 2, the Back to the Future trilogy, Indiana Jones, Fantozzi, Amici miei. Many of them are sequels, some are sagas others are trilogies.

But the real push to go on came once again from abroad: the showings at various festivals around the world were all sold out because they were flooded by Italian researchers who had heard the rumour that there was a film out about them. For these researchers in exile, society had come up with a dramatically poetical name: brain drainers. This category had been ignored in the first film and in the second I wanted to talk about them too, like a sort of dedication to them. I say ‘too’ because in fact I Can Quit Whenever I Want – Masterclass is about a lot of things I wanted to discuss from my point of view: the times we live in, the fact that sometimes we don’t take enough care of certain types of intelligences, the desire for redemption. But it is also an homage to the American action cinema of a few years ago as well as to our “Italian-style comedy” and to all the narrative TV series where people of my generation see reflections of themselves. The saga I Can Quit Whenever I Want has been a long and lovely journey. A true epic which took a year and a half of writing, long preparation dedicated to some sequences unprecedented in Italy, and almost twenty weeks filming all around the world, over a month of post-production, with over 300 people working shoulder to shoulder with the one single aim: to make you laugh.