I Can Quit Whenever I Want
Ad Honorem

Groenlandia
and Fandango
with Rai Cinema

Sopox is the nerve gas formula. Here is why he needed a chromatograph. This loony wants to synthesize the nerve gas.’

That’s how the final chapter of I Can Quit Whenever I Want saga, starts. Pietro Zinni is in jail and with him the whole squad. But they cannot stay long because Walter Mercurio (Luigi Lo Cascio) is ready to make a massacre and only the best minds in circulation can stop him.

The Squad meets for the last time to face off the worst bad guy ever. But they cannot do this alone, this time they will need the help of their historic nemesys, Murena (Neri Marcorè). With him, they will have to escape from Rebibbia to anticipate the moves of Mercurio, trying to figure out how to neutralize the attack he is plotting, an event that hundreds of people will be attending.

I Can Quit Whenever I Want – Ad Honorem it’s going to be explosive, with an epic, grand finale, that will close the circle of the whole trilogy. Each saga has an end. 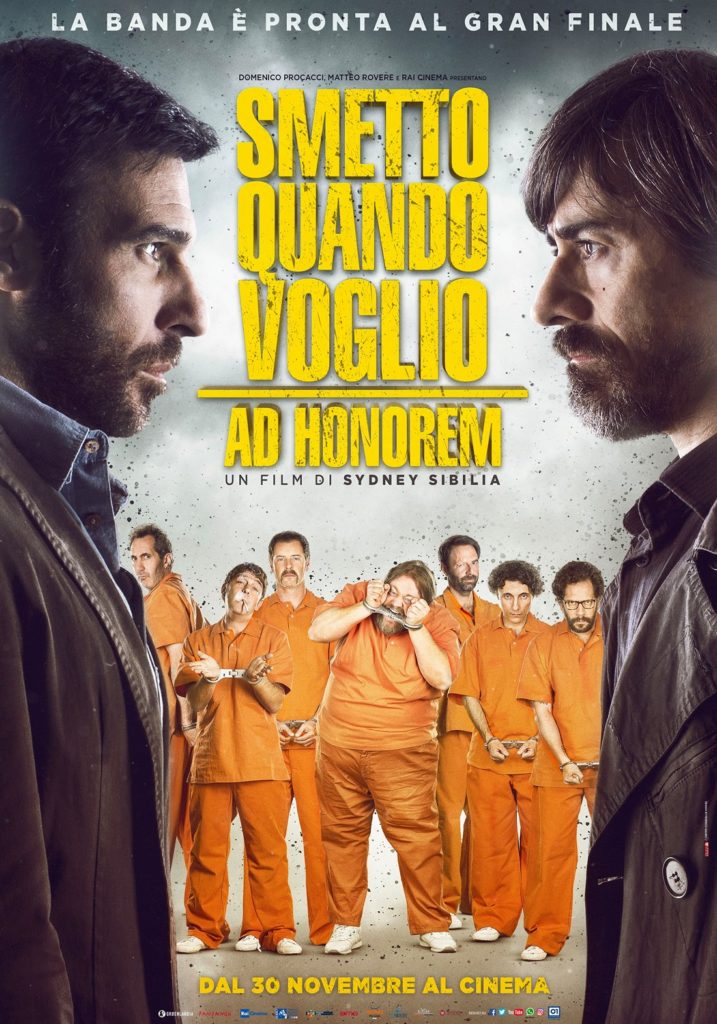 A film made off the cuff, from gut instincts and following the heart

So, let’s start with what you should already know. Ad Honorem is the third and last chapter in the trilogy I can Quit Whenever I want. At the beginning we had set out to make three films which, while they stuck to a strong comedy base, would go in three different directions, creating three different cinematographic experiences. In the first one, we were looking for the classic Italian comedy drawing entirely on the TV series of the time. In the second, we liked the idea of combining the police action Italian western with the American sequels of the 1980s and 1990s. In the third, the rules had changed again and this time I honestly couldn’t say what the inspiration was. Ad Honorem was written off the cuff, following gut instincts, from the heart, and the first cut was practically the film we ended up with. It felt like going down along a well-trodden path: all the events of the first two films led us to the one final solution. Ad Honorem completely follows the tradition of the epilogues of the classic trilogy, and answers the questions posed in the preceding films closing the circle, however, in the final face off between good and evil.

The biggest challenge was to place the villain in the context of the universe of I can Quit Whenever I want, which, broad as it is, still belongs, to the genre of classic comedy, intended to make people laugh. For some strange reason, cinematography all over the world is full of confrontations between good and evil, but not in Italy. They are all a bit good and bit evil. The last villain we had and we remember in a saga comedy was the surveyor Luciano Calboni, arch enemy and nemesis of Fantozzi. But today we use a different language and we need a really evil villain, ruthless, unscrupulous, credible and very human, who with his entrance at the end of the second chapter, brings the saga to a darker, epic and momentous level,. We were still in the writing stage when the casting director (Francesca Borromeo) called me to say: “Luigi Lo Cascio, Walter Mercurio can only be Luigi Lo Cascio”. We worked with Luigi on the motivations. To lend reality to the actions of such a determined villain, his motivation had to be totally convincing and actually more convincing than those of the goodie. Between the two of them, Petro Zinni and Walter Mercurio, we inserted a half figure, forcibly kept out of the second film but anti-hero directly in the gang of the first chapter, to highlight the continuous jostling between good and evil. Murena, the historic enemy, returns in this last chapter to show that nuances can always be forced and laughed at even when writing comedies aimed at archetypes. The gang, in this sense, is the great richness of I Can Quit Whenever I want. Knowing I have put it back in place for the last time makes me feel a little nostalgic. See you for the next film. It’ll have a different title, I promise.