Groenlandia
in collaboration with Rai Cinema
and Amazon Prime Video

Valeria has her life completely figured out. She goes through men one after the other, without ever looking back. She coaches a female volleyball team, and her coaching go well beyond the rules of the game, teaching her girls how to be independent and to avoid pain when dealing with love. The only man she’s ever lowered her guard for is her ex-boyfriend Marco who split up with her about one year before, breaking her heart. When after a very unusual accident, he suddenly comes back into her life, Valeria decides the time has come to exact her revenge on him. But it won’t be as easy as she thinks… 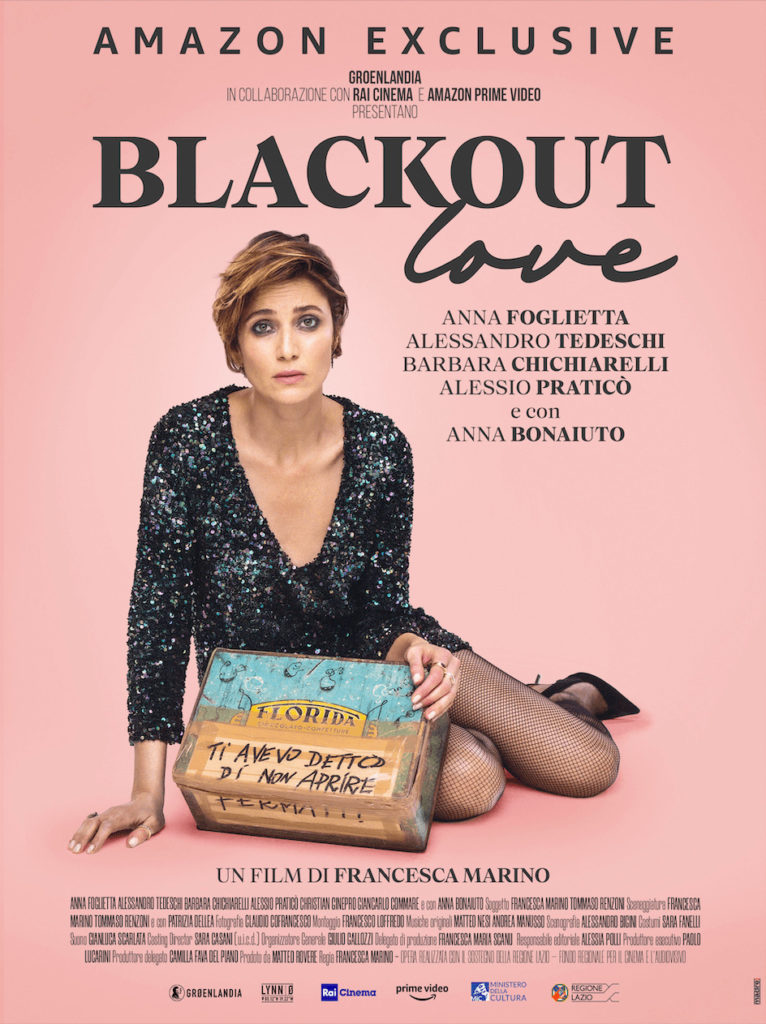 Blackout Love was born from the desire to explore modern love, from the eyes of an unconventional female character, compared to the stereotypes of women we’re used to.
A rom-com where the roles are reversed: finally there’s woman at the center of the story, with her own fears, insecurities and, above all, with her own strength and courage. Because I think the time has come to finally show also these aspects of the feminine.
The story I imagined is very close to me, as a female author in Italy I have often found myself in situations where it’s assumed I’m exclusively interested in female stories, intended as a sub-genre of stories ranging from the struggle for equality to “pink” literature à la Sex and the City or a romantic comedy featuring a generic prince charming …
I do not identify myself in this paradigm, and moreover, I believe that even the male genre is in crisis and searching for a new identity. That’s why I chose to tell this story, not because as a female author I have to, but because it’s my job as an author to explore the society around me and the ongoing change of roles and perceptions, and I want to do it in a profoundly different way than the stories we’re used to see by now.
Valeria, the film’s protagonist, with her pride and emotional immaturity, embodies the stereotypes of both male and female. And so does Marco, living inside the fragile glass room of his immense but extremely fragile ego.
Not to mention the couple of Silvia and Fabrizio, who depict the evolution of “family 2.0”, one where the career woman and the stay-at-home dad can exist harmoniously.
And regarding innovation , I care very deeply about the character of Rosemary, because I believe that love and sex are a right at any age. In fact, Rosemary is an elegant woman who embodies the modern values we should all get used to: women have a sexual and love life after 60, and they too can have a much younger partner!

Obviously she has her own skeletons in the closet: while far from being a “mother hen” type, she was perhaps too permissive as a mother.
In short, she’s a veritable love tornado, a terrible mother-in-law and at the same time a precious ally to our protagonist. Because in a certain sense, Rosemary is a resolute woman who learns to accept herself, and in the movie, through lightness, irony and “balls of steel” she will face her son, making her own “coming out” of sorts.
Blackout Love, however, doesn’t exclusively deal with the Yin and Yang of gender roles.
The love story between Marco and Valeria, and the mistakes they made and are still making during the film, bring to life another very important theme: the problem with emotions in an arid and vindictive world.
Men and women have never been at war as much as in 2020, on social media and in the bedroom, and the consequences of these “emotional bombings” are starting to show.
A society where only the shrewd and the cynical thrive, where you constantly have to win over somebody else, has taken its toll on the minds of the younger generations.
The saying used to go “make love, not war”, but now even love has become a war.
What happens to the protagonists is, in this sense, revolutionary, because only thanks to Marco’s amnesia – a “time machine” of sorts – they have the opportunity to retrace their steps and relive the stages of the “way of the cross” that was their relationship, like a reverse Marriage Story, an emotional Cluedo game in search of the culprit that ruined everything, the partner to be punished… only to discover that in love we either win together or we end up losing together.
For this reason, I chose a retro look for this movie, timeless and outside of time, as not to age in a few years just as the fears and loves that we carry with us as we grow up won’t.